Dr. Jeffrey Milligan: In My Own Words

I suppose I ended up working in international education due to an adolescent desire for attention that eventually matured into something.... else. When I was 17, I wanted to be a Marine Corps infantryman, but after two months at the Marine Corps Recruit Depot San Diego, Gunnery Sergeant Repp and I decided I wasn't one of the few good men they were looking for. Then I wanted to be a war photographer like Robert Capa, but I flunked out of the University of Missouri photojournalism program. 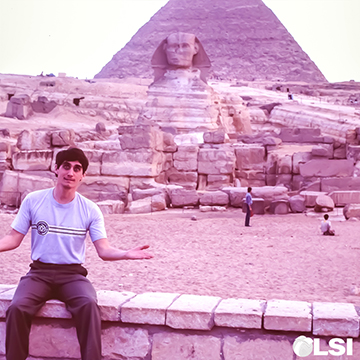 I came back to the U.S. with a bit more purpose, taught at a junior college for a while and worked part-time on my Ph.D. in Philosophy of Education. When I finished it, to my surprise, I was offered a job at the University of Nebraska and then, a few years later, here at FSU.

Looking back on it, I would have to say it was a series of failures, indecisions and accidents that led me to where I am now. I made a career out of the margins, I suppose, geographically, professionally, and intellectually. But those initial adolescent impulses matured, eventually, into something worthwhile I hope.

As for the impact of my work, I have no idea. Modest, at best, I suppose. Education is an act of faith in the future, an act of love really. You never know what will come of it, but you offer what you have in hopes that it will make the world a better place and make things a bit better for those who come after us. Perhaps a gesture along the way of kindness, or encouragement or being willing to help has been important to a student or a colleague. That's enough for me.

I am gratified to have had the opportunity to work with others at LSI to help rebuild our profile in international work. And I take a little pride in recognizing people who are smarter and more capable than I am, so I think perhaps my most important decision as director was to turn the reins over to Rabieh and Stephanie, who are already taking LSI to new heights. They can do all the work. I'll claim a little of the credit.